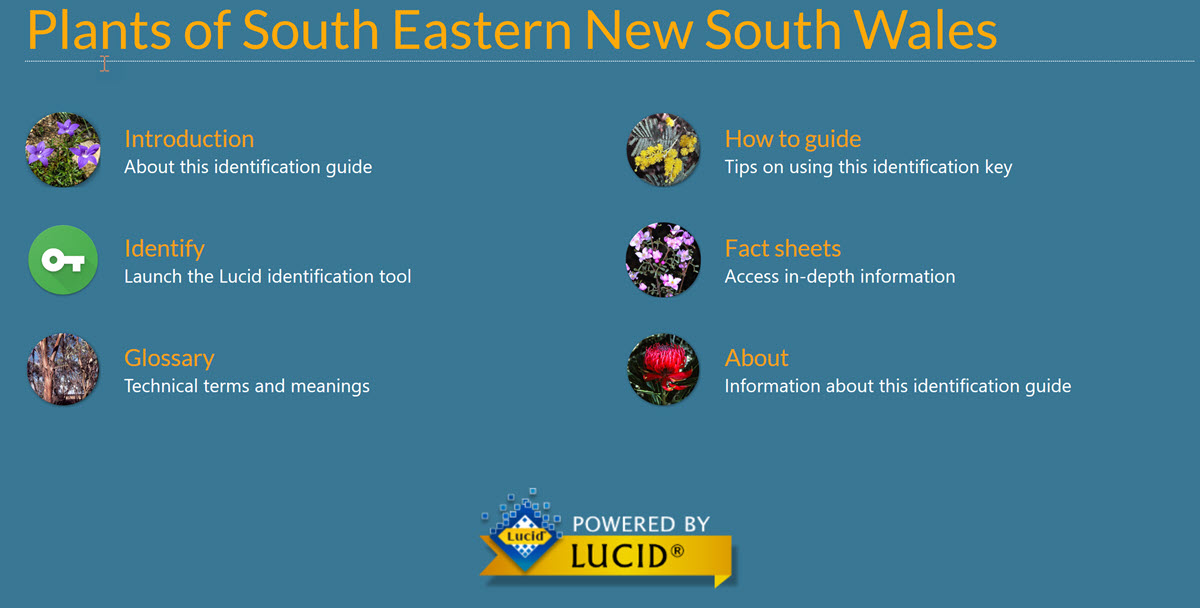 The Plants of South Eastern New South Wales app describes 3900 plants in South Eastern NSW and includes a tool to identify plants you may find in this region.

This is a first version and I have found there are still issues with the key. Some characteristics are not scored for all plants, making correct identification harder. Nevertheless, the descriptions are very good and the key has great potential.

This plant identification key is designed for anyone who has an interest in finding out about the plants of south eastern New South Wales. It includes about 2,900 species of plants accompanied by about 10,000 images. It includes Eucalypts, but not ferns, orchids, grasses, or most sedges or rushes. There are about 3,900 relevant species in the area covered by this key.

The key mostly uses easily seen characters and a minimum of technical terms to help with the identification of plants. It is not designed to key out to a single species, though sometimes it does. It is designed to narrow down the possibilities of what the plant might be to a limited number of species. The photos may then help you decide what your plant is.

In most cases, the use of a hand lens or a low power microscope is not necessary for identification, except when counting the number of flowers/florets in a flower head, and deciding whether hairs on stems are stellate (multiple hairs arising from a point, looking like a star), branched, or simple. Identification needing the use of a high power microscope is beyond the scope of the key.

Area covered by the key

Plant distributions are derived from the maps generated for individual species in Spatial Portal, Atlas of Living Australia and from personal observation, and occasionally from the NSW Department of Environment and Heritage Bionet Atlas http://www.environment.nsw.gov.au/atlaspublicapp/UI_Modules/ATLAS_/AtlasSearch.aspx.

Records dated before 1 January 1976 have been disregarded. Distributions are given only for within the area covered by this key.

Coastal records are from east of the escarpment west of Sydney and east of the hills inland from the Princes Highway. Records in the ranges are from the escarpment west of Sydney and the hills west of the Princes Highway to the western edges of the large national parks running south from the Blue Mountains to the Victorian border. Records on the tablelands are from west of the large national parks in the ranges to north and south of the ACT. Records on the Western Slopes are west and north of the ACT.
Plant Names

Plant names are those of the Australian Plant Census as at May 2018. In cases where the Council of Heads of Australian Herbaria has not yet made a determination, plant names published in Plantnet and/or VicFlora are used.

Photos used in the key

Most photos have been sourced from the Internet. Some were taken during the fieldwork for the books Flowers of the South Coast and Ranges of New South Wales (3 volumes) and Flowers of the ACT and Region. For some species recorded in this area, no photographs are available, or photographs are only available by linking to another site on the Internet.

Betty Wood, by training a pharmacologist, developed an interest in wildflowers and their identification many years ago when she first settled in Canberra. Her mother-in-law, an English botanist, helped her to learn to use botanical keys to identify Australian plants.

She is co-author (with her husband Don) of Flowers of the South Coast and Ranges of New South Wales in three volumes, Flowers of the ACT and Region, and sole author of Simple Guide to Eucalypts and Similar Trees of the South coast and Ranges of NSW (Including the Illawarra and Southern Highlands) and the Lucid key and app Plants and Fungi of South Western New South Wales.