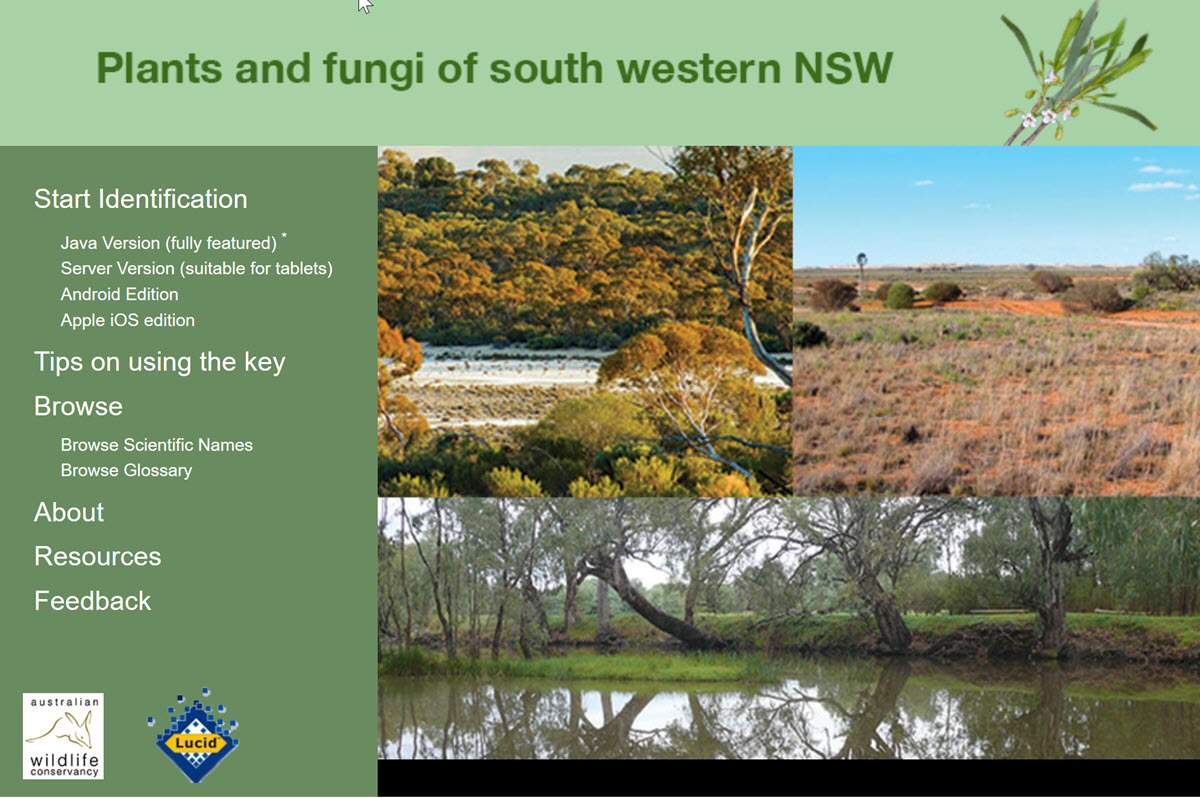 A free app for iPones and Android available on Apple iTunes and Google Play.
You can also access it via computer on the Lucid website.

The Plants and Fungi of South Western New South Wales app describes 1100 plants in South Western NSW and includes a tool to identify plants you may find in this region.

The key uses a limited number of easily seen characters using a minimum of technical terms to help with identification of plants. It is not designed to key out to a single species, though sometimes it does. It is designed to narrow down the possibilities of what the plant might be to a limited number of species. The photos may then help you decide what your plant is.
In most cases, the use of a hand lens is not necessary for identification. Identification needing the use of even a low power microscope, or a detailed knowledge of technical terms is beyond the scope of the key.

The character ‘ligules’ (for grasses) is the only character in the key that requires a hand lens. A hand lens will also be helpful for other characters e.g. ‘spikelet length’ for grasses with small seeds.

Area covered by the key

The terminology for plant names is that of the Australian Plant Census at as June 2013. In cases where the Council of Heads of Australian Herbaria has not yet made a determination, plant names published in Plantnet are used.

Background to the key

The key was based initially on the set of photos taken at the Australian Wildlife Conservancy property, Scotia Sanctuary, in western NSW, between 2006 and 2012. Additional photos have been sourced mainly from the Internet. For some species recorded in this area, no photographs are available, or photographs are only available by linking to another site on the Internet.

Seventy-four plant species were found planted on Scotia Sanctuary, of which 8 also occurred there naturally. Four planted species were of unknown cultivars.

In almost all cases, duplicate specimens were deposited at the Australian National Herbarium, Canberra. Four specimens were identified by the South Australian Herbarium. Three species (Maireana sedifolia, Maireana trichoptera and Portulaca intraterranea) were not confirmed by either herbarium. Three species (Austrostipa sp., Marsilea sp., and Triglochin sp.) were identified only to genus level and not sent to an herbarium.

One hundred and one additional species not seen during the project are recorded for Scotia Sanctuary.

Betty Wood, by training a pharmacologist, developed an interest in wildflowers and their identification many years ago when she first settled in Canberra. Her mother-in-law, an English botanist, helped her to learn to use botanical keys to identify Australian plants. She is co-author (with her husband Don) of Flowers of the South Coast & Ranges of New South Wales in three volumes, Flowers of the ACT & Region, and sole author of Simple Guide to Eucalypts and Similar Trees of the South coast and Ranges of NSW (Including the Illawarra and Southern Highlands).

A free app for iPones and Android available on Apple iTunes and Google Play.
You can also access it via computer on the Lucid website.