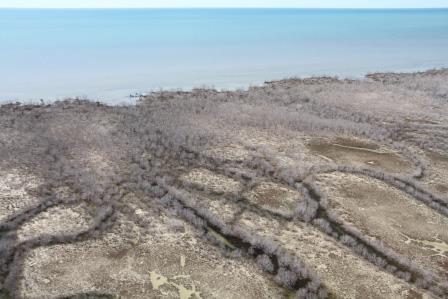 A James Cook University (JCU) scientist says an ‘unprecedented’ dieback event has now been confirmed to have occurred, with surveys showing thousands of hectares of mangroves on the Gulf of Carpentaria suffering a severe dieback.

Professor Norm Duke, spokesman for the Australian Mangrove and Saltmarsh Network, said scientists first heard anecdotal evidence about the scale of the mangrove dieback in early 2016. This has now been confirmed by aerial and satellite surveys.

What is a mangrove?

A mangrove is a tree, shrub, palm or ground fern, generally exceeding half a metre in height, that normally grows above mean sea level in the intertidal zone of marine coastal environments and estuarine margins.

Dr Duke said around 7000 hectares of mangroves, or more than nine percent of the mangroves in the area stretching 700 km west from Normanton, have been affected.

He said it is the first recorded instance of its kind attributed to drying conditions and high temperatures and is likely associated with global climate change.

‘We have seen smaller instances of this kind of moisture stress before, but what is so unusual now is its extent, and that it occurred across the whole southern gulf in a single month. What we are seeing is a natural process, but nature usually does this incrementally. Not with such severity. We have never seen this before.’ Dr Duke said .

He said current evidence favours the proposal that the mangrove dieback is most likely caused by the extended dry season rather than high temperatures alone.

‘The normal wet season in the region is four to five months long, with about 100 mm falling in a month. But it seems there were 10 or 11 months in a row with rainfall below 50 mm.’

He said there is a desperate need for proper monitoring with a properly funded study, especially when the importance of mangroves to the wider eco-system was taken into consideration.

Can these sites recover?

‘Some of the mangroves will recover, some won’t. But there are already anecdotal reports of marine life dying and piles of dead seagrass washing up on the shore. If that’s true then turtles and dugongs will be starving in a few months.

The scale of this impact, covering the distance from Sydney to Melbourne, necessitates a more thorough assessment to better understand both the cause and the considerable wider impact and repercussions.’