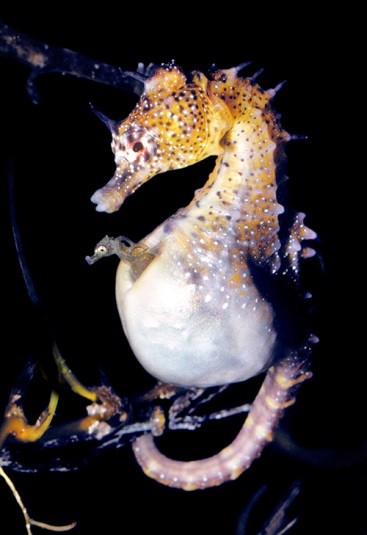 Seahorse pregnancies are carried by the males but, when it comes to breeding, seahorses have more in common with humans than previously thought, new research from the University of Sydney reveals.

Seahorses are famed for being part of the only family in the animal kingdom (Syngnathidae) in which the male is responsible for pregnancy. What hasn’t been known until now is the degree to which male seahorses nourish and protect their embryos in their brood pouch during the 24-day gestation period.

Findings co-authored by Dr Camilla Whittington from the University’s School of Biological Sciences, published in Molecular Biology and Evolution, show male seahorses (Hippocampus abdominalis) play as much a part in nurturing embryos during pregnancy as female mammals. Previously their role, other than as pouch provider, was largely a mystery.

‘Surprisingly, seahorse dads do a lot of the same things human mums do,’ said Dr Whittington.
‘Seahorse babies get a lot of nutrients via the egg yolk provided by their mothers but the pouch of the fathers has also evolved to meet the complex challenges of providing additional nutrients and immunological protection, and ensuring gas exchange and waste removal.’

Gene expression during pregnancy is similar to that of humans

Dr Whittington and colleagues found male seahorses are able to deliver nutrients to their developing embryos, particularly energy-rich lipids, and calcium to allow them to build their tiny skeletons. It is likely these nutrients are secreted in the brood pouch and then absorbed by embryos.

They also found male seahorses’ gene expression during pregnancy was similar to that of humans. Their research involved taking samples from brood pouches and assessing how gene expression changed during the course of the pregnancy. It is the first RNA sequencing study – monitoring how much genes switch on and off – across the full course of pregnancy in any animal.

Hippocampus abdominalis or the Bigbelly seahorse belongs to the Pipefish family (Syngnathidae).

See images of the Bigbelly Seahorse on the Atlas of Living Australia.

‘Regardless of your species, pregnancy presents a number of complex challenges, like ensuring you can provide oxygen and nutrients to your embryos. We have evolved independently to meet these challenges, but our research suggests that even distantly related animals use similar genes to manage pregnancy and produce healthy offspring.’

The similarities between seahorse, mammal and lizard pregnancies revealed in the paper warrant further investigation, Dr Whittington said. This will indicate whether the evolution of animal pregnancy across all species is more similar than previously thought.